General, The Pavilion at Stable View

Our Friends are being brought up to date via this press release regarding events as they are evolving during the summer at Stable View.

Pavilion. We will break ground on 29th July. The initial groundworks will involve removal of dirt to grade, plus the digging of a drain from the site to the existing retention basin behind the “Alp”. This area will then be reseeded so that it can be used for Oktoberfest.

The entire project will take approximately a year. Designer Builders is the GC and the Pavilion will be LEED Gold compliant. We believe this to be a first for a building of this type. The Pavilion will be used for Weddings, Corporate Retreats, Family Reunions and as a Conference Center. 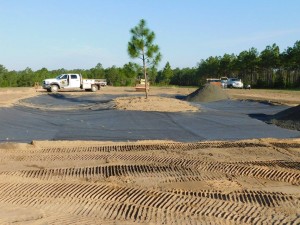 Second Cross Country Course. The land has been cleared and Bermuda has been sown over most of the new Course. We have cleared the area (c50 acres) these have been seeded and fertilized in four tranches. We are three quarters of the way towards completion.

Eric Bull has built the newest Water Feature and Mogie Bearden- Muller has started to consider initial designs for the Cross Country Course which will be first used in February 2018 – this will be for the inaugural Stable View Eventing Academy.

The second cross Country Course complements the old Course by being open, ranging and very viewer friendly. Later this year we will be building some oversized gazebos which are to be used as Course “Gathering Paces”. This will be a very viewer friendly addition to the Stable View portfolio. Stadium and Dressage will use the existing facilities. The Stable View Eventing Academy will not only use the new Course, but it’s has been designed as a Schooling Course and it not as twisty and tree lined as the existing course. Going forward the courses will be differentiated as The Old and The Parks. As with The Old Course, The Parks is irrigated.

oyd Martin, ETB Schooling Field at Stable View. This is in the process of being leveled and seeded with Bermuda. As with the rest of the working areas at SV this will be seeded with Winter Rye in October. The entire area is irrigated with Neilson 150 “Big Guns” which are normally used for crop spraying. It’s intentioned that the Schooling Field will open on January 1, 2018. Bookings will be online. The Schooling Field will have its own entrance and parking. The jumps are being built by ETB (Eric Bull).

The Pavilion itself is a view, but have you seen o

Photos are up online at SparkyPhotography.Store fo

🎉 Tap the link in bio for the results of Stable

Stable View offers a quiet, and comfortable setting for riders to demonstrate their hard work, spend time with peers, and have fun! On-site perks include:

🐴 Stalls and paddocks
🏡 Overnight accommodations
☕ Complimentary Coffee, and Tea
👢 Rider Lounges with help-yourself snacks and water, and for resting your boots
🍇 Evening Graze & Gaze for light bites and fellowship
💦 A Misting Station to keep horses cool
🌳 Shade for watching rounds

We knew it was fraudulent. We had Dressage not Stadium in that arena!

Stable View offers a quiet, and comfortable setting for riders to demonstrate their hard work, spend time with peers, and have fun! On-site perks include:

👢 Rider Lounges with help-yourself snacks, coffee, water, and for resting your boots

We hope to see you this Summer!

Congratulations to our winners in the Summer Classic One, June 9-12!

Daniel Geitner wow he is such a good professional  

Can't wait to come back!

At Stable View, we have spent the last three months discussing our pricing policy for 2023.

📈 Over the past year our overhead has gone up exponentially: Remuneration (+27%), Gas and Diesel (+37%), Fertilizer (+42%), Food (+20%), and Third Party Providers (+20%) as examples. While smaller in percentage terms, Insurance (10%) and Maintenance (12%) are significant in terms of their impact - they start out representing large dollar amounts. Replacement cost of equipment (Zero Turns, Gators and parts) is up around 20%.

💡 In as much as these cost inputs are significant, and hopefully unsustainable, Stable View has opened up new markets. As a result, it is receiving an increasing but different mix of cash flow. Weekday Schooling entries - Dressage, Jumpers, and Thursday/Friday Eventing Academy Cross Country - have increased, and our Recognized HT, Dressage, and Eventing Academy entries are up approximately 15% year on year. Hunters and Jumpers is the one area where we are seeing immediate traction: entries for the first two shows in our H/J Challenge Series have exceeded our expectations. While we have fewer weekends available for Weddings, our Accommodations bookings are up around 20%.

⚡ As a privately owned facility, we must pay our bills out of our cash flow. Therefore, in developing Stable View, we have done what any start up would do - we've identified and established new markets. Stable View believes that by growing, and introducing new initiatives, we can offer a quality product while maintaining attractive pricing. Therefore ...

👍 Stable View's existing entry fees will remain unchanged from 2022 to 2023. While we realize that in many instances Stable View's current prices are comparatively low, our view is that the next year is going to be tough for our clients. We believe that keeping our prices at present levels will both assist in the development of our business while enabling our supporters' budgets to be stretched a little further.

We will continue to identify new markets, create unique opportunities for sponsors, and improve occupancy of the Pavilion and Accommodations.

Thank you Stable View! The Aiken County Pony Club appreciates all you do for the community!!

Thank you. And I hope the good will you offer will pay you back with continued high entries

Thank you Cyndy Olliff and Barry for doing your best to keep competitions affordable! Stable View is a treasure!❤️

As an equestrian that can’t afford the bigger shows, this is MUCH appreciated and very kind!

Love the shows at Stableview!!! I’m a winter visitor and will do my best to attend as many as I can! You have great volunteers and the grounds are easy to get into and are beautifully maintained!! Such a great venue!!

Thank you. We love schooling at Stable View and greatly appreciate your consideration of the equestrian community. We are all feeling the impact of the existing economy on our farms and horse community.

To everyone at Stable View- extraordinary efforts done by an extraordinary group of people!!💃💃I’m sure everyone more than appreciates this !!!!!!!!😝😝😝😝👊👊

Thank you for continuing to go above and beyond for the community! 👏

We love your shows and on-site housing!

Thank you Stableview. That is appreciated more than you know!!!

I can only afford board these days. Even pay rent per each pet at the apartment. Your efforts for the equestrian community are extraordinary! Thank you for your incredible support.

Thank you for all you do to help our community

Here's something you could do that's not much cost. Please remove a lot of the bright white areas around the advertising in the 1st dressage ring. My horse startles every time she turns on the diagonal and faces it. No opportunity to desensitize them in that ring, either. I'm sure she's not the only one. Thanks.

So appreciated!!! What a nice surprise 💘

Wow.... incredible. Thank you for being good people. 🐎💙

Thank you, Stable View! This adult ammy who works full time to support her horse is very appreciative!!

Thank you!!! Our favorite venue!

Are these shows Usef recognized?